Alterity 101 Will be on Hollow Earth Radio Tonight 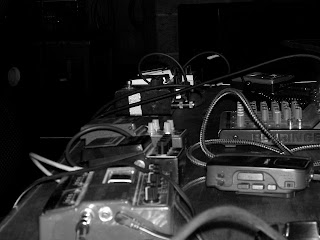 From Rob: "I am generally my own worst scavenger. Compositions get re-worked and recycled with alarming frequency. "AK Duet" was put together from various officially released Climax Golden and r millis solo sources (exactly which ones would be telling) for choreography by Aiko Kinoshita for a dance piece entitled "Little Hungers" that premiered in Seattle in 2011. "Murung Field Wreck" is a series of field recordings made in various Asian locations remixed with a piece that will appear or already has appeared (depending on which universe you are in) on an r millis solo LP called "Relief" on the Helen Scarsdale label. "Orchlabreapourmoi" is a mix of several unmentionable Climax, stolen and solo sources. "Drift Away" was composed for a short film by Jean Julien Pous called…Drift Away. This is a slight re-working of the original composition. Most of these pieces were created for use in live performances."

The tape will not be released for a couple months. This will be the public's first chance to hear it. After that we will hear tapes of upcoming Alterity 101 contributors past works with a few surprises... Kurt told me he's bringing a bunch of cassette decks, things should get weird!
TUNE IN at 8pm this Sunday, Jan 13 for the mind bender!
at 1:52 PM

Alterity 101
Alterity 101 is a Seattle based Cassette label, distro and blog dedicated to experimental and underground sound art.